Walking In My Father’s Steps: An OSS Daughter’s Journey 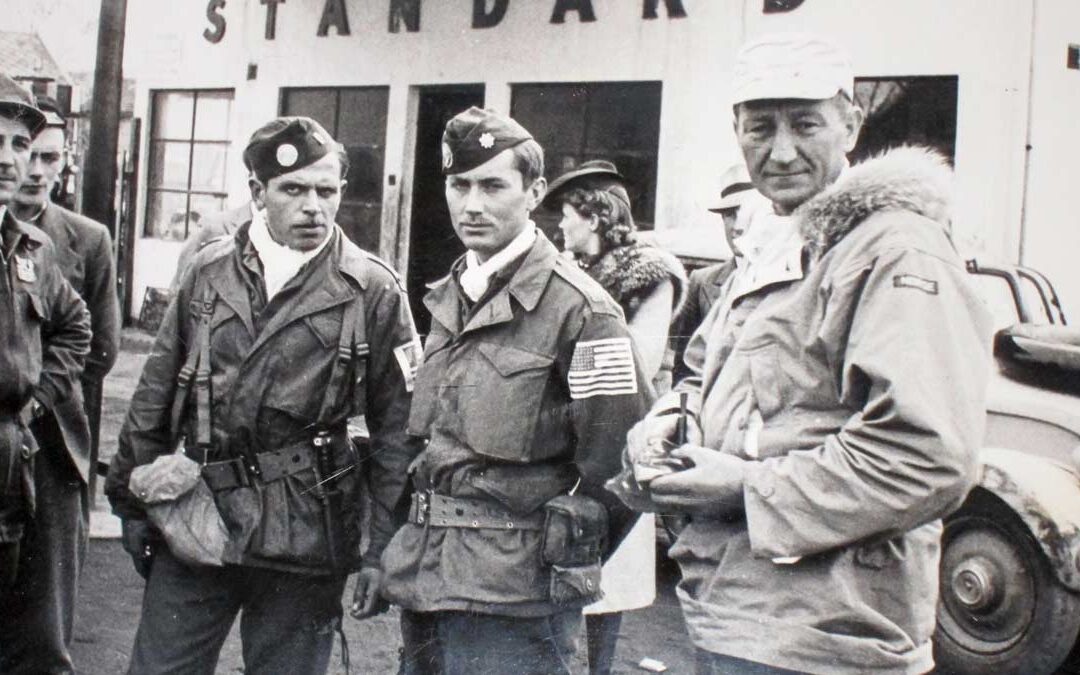 For any Daughter of an OSS (Army) Veteran, walking a few miles in your father’s footsteps can be challenging, but on this past Memorial Day Hollywood

Ms. Monroe was invited to participate in the US Navy Distinguished Visitor Program in San Diego, CA, abroad the USS Ronald Reagan as part of her Veteran Affairs work. She had decided she would dedicate her journey to her 88 year-old father Edward S. Petros of Virginia as a Memorial Day and Father’s Day tribute. Monroe related how her father traveled 30 days by ship in the early 1940’s, at the tender age of 17, aboard the George Sharwood Liberty Ship to join the American war effort by enlisting in the US Army in hopes of being of service to his new country, and to realize the American Dream.

Last weekend Monroe was in Washington, D.C., and had the opportunity of introducing her father to the former Secretary of the Army Martin Hoffmann. She listened intently as the pair exchanged old battle stories, as well as their growing concerns over the immediate needs and struggles facing our young soldiers and servicemen today. Hoffmann, who is a strong advocate for the needs of soldiers, is still extremely active in the military community— especially those suffering from traumatic brain injury, suicide prevention, and post-traumatic stress disorder.

Before leaving DC, Monroe asked her father for a few pair of his socks. She explained she would wear them in his honor while aboard the USS Ronald Reagan, as a gesture of remembrance of his life’s journey so many years ago. Monroe’s own journey began at San Diego’s North Island Naval Base for safety briefings. After gearing up with the other DV’s (Distinguished Visitors) and donning her father’s socks in black combat boots, she and the others were whisked off on a C-2 Greyhound Airplane for the short flight to the ship where they experienced an actual arrested landing onto the ship’s flight deck and were greeted by a host of young officers, sailors, soldiers, and aviators in colorful full dress.

The DV’s would spend the next forty hours abroad the ship and get a first hand account of the life of a sailor aboard an aircraft carrier. They would walk thousands of steps down narrow hallways and small flights of stairs, as well as learning to navigate around all the areas of the ship. Monroe stated they were housed in actual staterooms (her’s was named the Patriotism Stateroom) and issued linens, towels, etc. The DV’s were equipped like the sailors they were their to observe, which required them to use numerous boxes of ear plugs, wear Mickey Mouse eared helmets, floatation equipment, and safety vests.  Further they participated in receptions, watched drills, and ate meals with the ship’s crew. Tour guides were on hand to make sure the guests didn’t become overwhelmed, which can easily happen when trying to adjust to the tight living quarters and rigors of life aboard a ship.

While on board the DV’s were privy to watch many of the ships daily functions. They observed jet qualification landings and take offs that occurred routinely both night and day. Monroe was amazed by the strong leadership qualities she observed by this young crew as they performed their duties. One after another the group watched young pilots line up to hit their marks and perfect their aviation skills. One added bonus of the trip was being able to watch an ammunition exchange between two ships. Each stateroom was equipped with a monitor for viewing deck activities 24-7.

It was apparent to Ms. Monroe during her time as a DV onboard the ship that she was mingling with the future leaders of tomorrow, and felt awe inspired being in their midst.  In the Ronald Reagan room she came across a quote from the former president,  “I learned from my father the value of hard work and ambition, and maybe a little something about telling a story. From my mother I learned the value of prayer, how to have dreams, and believe I could  make them come true.”  Monroe remembered feeling as she walked away from that room a renewed appreciation for the lessons her father taught her.

When Monroe boarded a helicopter to leave, a couple quotes of former President Reagan ran through her mind: “Peace through strength” and “It is the soldiers and their stories that bring a ship and our military to life.”  As the vast waters rolled past, Monroe reflected back on her father’s life and what a significant impact he was able to make from such humble beginnings. Besides serving in the US Army as a proud member of the OSS, he was also the landlord of the Women’s Service Association Memorial at Arlington National Cemetery in Arlington, VA.

Also, she recalled how her father and mother, Marie, (longtime friends of Danny Thomas) helped him establish and maintain St. Jude Children’s Research Hospital for over five decades. As a result of her father and her late mother’s work, they received the Beacon of Hope Award in 2008 for their contributions on behalf of children affected by childhood cancers and other catastrophic diseases. The Beacon of Hope Award was established for Monroe’s parents by St Jude Hospital’s CEO, Richard C. Shadyac Sr., to honor their service to St. Jude’s in Washington D.C. at the National Building Museum.

Finally, she remembered an American hero…her father…and for one brief moment of time was able to not only walk in his steps and pay tribute to his accomplishments, but was also able to acknowledge and witness all the soldiers, sailors, and aviators, past and present, who safeguard this nation unselfishly everyday…. heroes all…who we celebrate and honor every Memorial Day.  God Bless America!